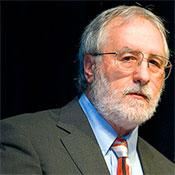 Richard P. Gabriel is known for his work related to the Lisp programming language (and especially Common Lisp) in computing. His best known work was a 1990 essay “Lisp: Good News, Bad News, How to Win Big”, which incorporated the phrase Worse is Better, and his set of Lisp benchmarks (the “Gabriel Benchmarks”), published in 1985 as Performance and evaluation of Lisp systems, which became a standard way of benchmarking Lisp implementations.